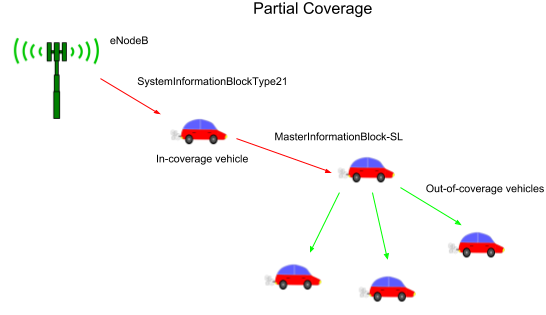 The OSS ASN.1 Tools, development toolkits for ASN.1 based applications, can be used to develop C-V2X solutions.  A sample program included with the OSS ASN.1 Tools demonstrates how to implement C-V2X signaling using the partial coverage scenario. The sample demonstrates how an in-coverage vehicle, acting as synchronization reference for the transmitting (out-of-coverage) vehicle, receives SystemInformationBlockType21 (part of BCH-DL-SCH-Message) from the eNB, configures its sidelink, and transmits MasterInformationBlock-SL (part of SBCCH-SL-BCH-Message) message to the transmitting vehicle, which in turn modifies the received MasterInformationBlock-SL message and re-transmits it for C-V2X sidelink communication and discovery for other out-of-coverage vehicles. Using Sidelink discovery vehicles repeatedly broadcast short and fixed-size MasterInformationBlock-SL (SBCCH-SL-BCH-Message) messages that can be detected by nearby vehicles, so they can synchronize with each other to establish wireless connectivity.  The control plane messages in this exchange are based on ASN.1 RRC.
The other mode, mainly used for V2N communication, utilizes the LTE Uu air interface between UEs (vehicles) and eNBs. As an example of V2N mode, a vehicle sends a message via an eNB to an application server which, using Evolved Multimedia Broadcast Multicast Services (eMBMS) - a point-to-multipoint LTE interface for efficient delivery of broadcast and multicast service - in turn broadcasts the message to all nearby vehicles.. The control plane messages in this exchange are based on ASN.1 RRC, M2, and M3 protocols. 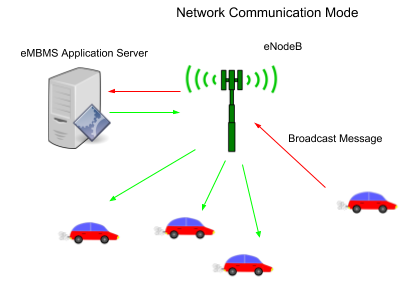 The OSS ASN.1 Tools are packaged with sample programs for 3GPP protocols such as RRC, M2, M3, and various other protocols.  These samples can be found under the “samples/standards” directory. To learn more about the ASN.1 Tools, please visit or contact us at info@oss.com.
Posted by Rajul Gupta at 7:37 AM